Ulanngom seemed like an Ok town but I had already decided I wanted to keep going and camp at Uureg Nuur which is a small Lake in the north west corner of Mongolia. 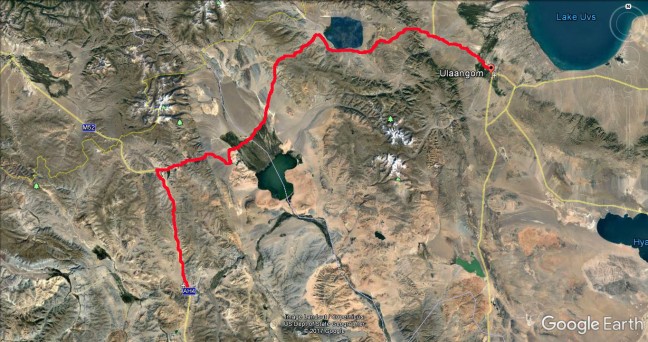 So after a few enjoyable kilometres of Bitumen in Ulaangom it abruptly ended just north of the town where I needed to hit the dirt again and head west through a Mountain pass. 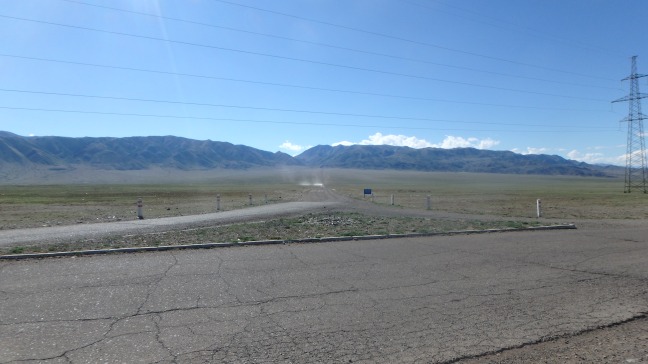 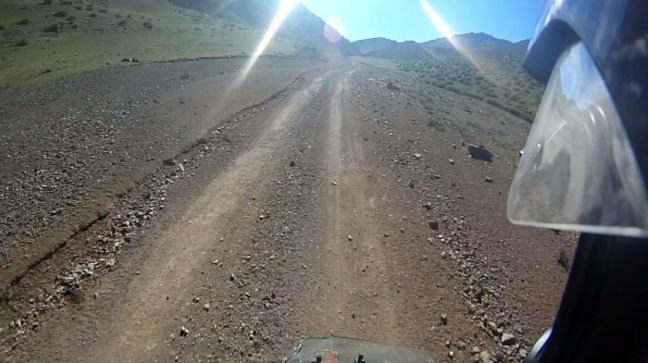 What’s the most common Off Road Vehicle in Mongolia, Land Cruiser, Nissan Patrol……. no Toyota Prius and this guy just didn’t want to let me pass, but he couldn’t keep it up forever and soon enough was eating BMW dust. 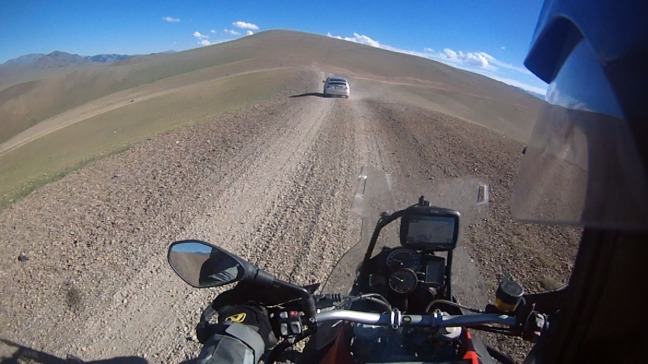 Down into a Valley where I had small glimpses of Uureg Nuur, just enough to keep me motivated.

The other thing I was getting glimpses of were very large snow capped Mountains which just happen to be in the direction I was going tomorrow, might need some climbing equipment.

Then it came fully into view Uureg Nuur or Uureg Lake (Nuur means Lake), it was stunning, probably the best looking Lake I have seen in Mongolia.

Now to find the ultimate Campsite, this seemed good and I couldn’t go past the view.

The only issue was I had to ride back up over that crest in the morning as that was the only way in or out.

Not a bad view from the Deck… 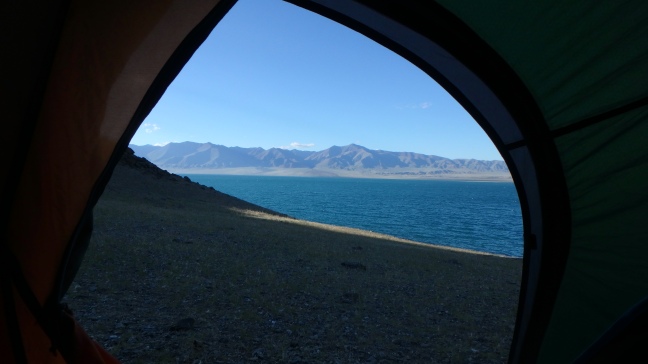 The following morning the Lake looked totally different, as there was no wind it was flat and like a mirror.   Today should be an easy day, the GPS was telling me it was a little over 200 Kilometres to Ulgii, I should be there before lunch then……. 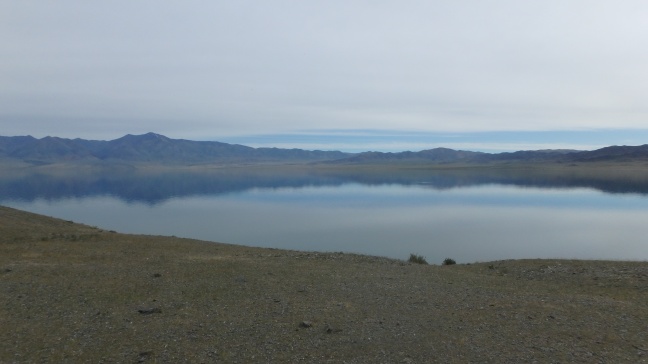 So obviously I made it over the crest or you wouldn’t be seeing these photos, just on the other side I spotted this little piece of prime Real estate, Location, location, Location.

So I followed the GPS north alongside the Lake and this is where the tracks got confusing, the GPS was showing me a track that wasn’t there and I was riding on pieces of a track that didn’t show up on the GPS, the Maps App on my phone had a different track altogether.   I followed to GPS the best I could, the track was very rocky and eventually moved away from the Lake and towards the Mountains…

At the top of the Pass the temperature dropped to around 8 degrees, the GPS told me I was high….

Beautiful snow capped Mountains in the distance…to big for me to climb I think.

The series of Tracks lead through these passes for a while and a number of times I was lost because the GPS and tracks did not match.   The GPS was also trying to send me on a different route than the tracks labelled ‘Northern Route’, as I had come this far I ignored the GPS and followed the Northern Route.

Eventually the track lead me down from the mountains onto a flat Plain which from up there looked like it was some type of soil which was a dark grey or brown colour, I was just happy to be out of the Mountains.   As I rode closer I realised that this Plain was not soil at all and full of rocks and stones ranging from Golf Ball sized to Football sized and the track through it was very sketchy at best.   This area I will call the Rock Graveyard, its where all the rocks and stones in Mongolia come to die and make my life an misery. 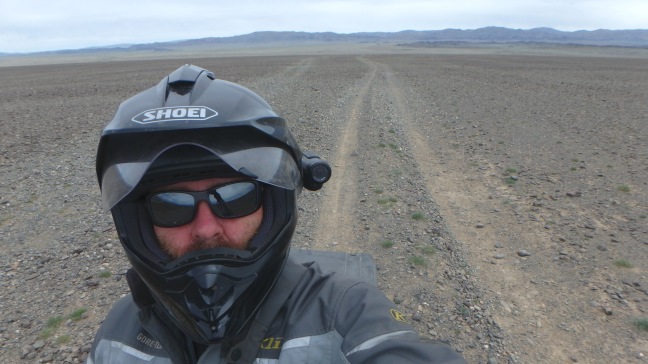 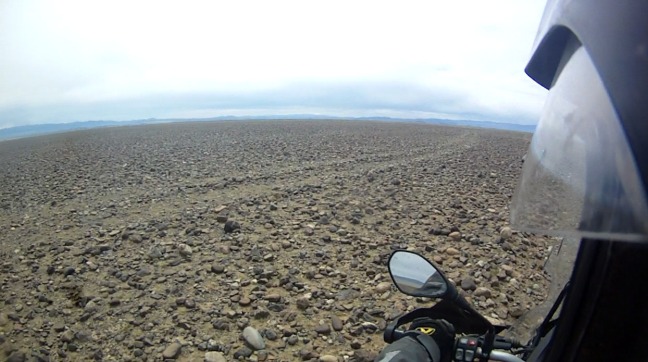 This is what this area looks like from Google Earth and I had to cross right through it, incidentally the GPS was trying to send me down the East (Right) side of this Lake but I disagreed, Paul 1 GPS 1.

After over an hour of very slow riding sometimes over football sized rocks I noticed a Creek or River showing on the GPS screen, It had to be a dry Creek surely……

This was a River that drained into Achit Lake, which if you say that fast is what I was calling it later…….

This extra water was from the Snow Melting in the Mountains to the west and it had the River bursting its banks and creating a number of Rivers which I had little choice but to cross. 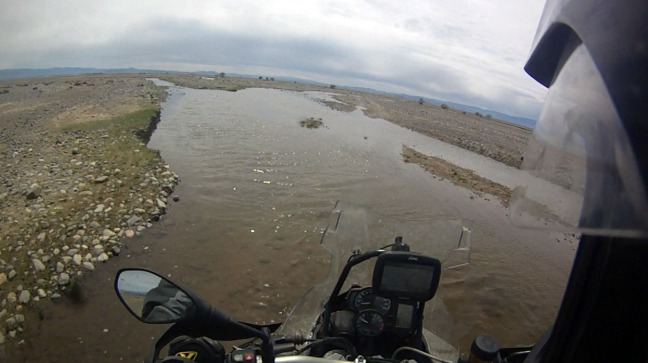 The first 3 crossing above were OK, fast flowing but not that deep.   Then I got to this last bit, it was fast flowing and deep, over half a metre in areas and when I walked it the current nearly pushed me over, throw in the weight of a fully loaded bike and the odds of getting across without dropping it aren’t good, actually they are non existent.

I spent the next two hours riding up and down the River bank trying to find a place to cross, would it be shallower nearer the Lake, no the water had spread into a number of Rivers and they were deeper with muddy bottoms.   What about upstream maybe it would be better, no the River was in 3 sections but very deep and fast flowing.   The problem with doing all of this exploring is I now had less than a quarter of a tank of petrol so going back through the Rock Graveyard and all the way around the Lake was not really an option.   Nothing left to do but harden up and dive in somewhere, Ok this looks Good…. 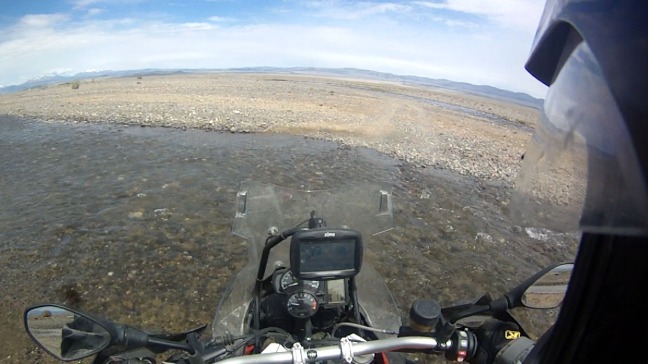 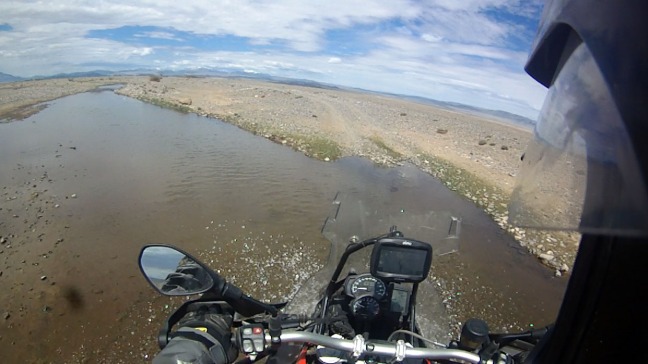 Ah…No.   Notice the large fly in this photo well there were literally millions of these following me and they bite so I couldn’t take my gloves or Helmet off at all.

All of the riding over these rocks caused the mount to my Helmet Camera to break off and I was lucky I didn’t lose it all together, the photos from here I had to take with the real Camera.   Anyway so I found this area below where I though might be OK, I walked it and it was around half a metre deep around the middle and fast flowing but not as bad as the other areas.   I loaded all of the electrical gear and other things I didn’t want to get wet into my Tank Bag and slung it over my shoulder just in case and without over thinking it too much I rode in.   Crossing this part was difficult, in fact I got stuck on slippery rocks twice and nearly dropped the bike both times, the bottom half of my Panniers were under water as was my boots which were already full of water anyway. 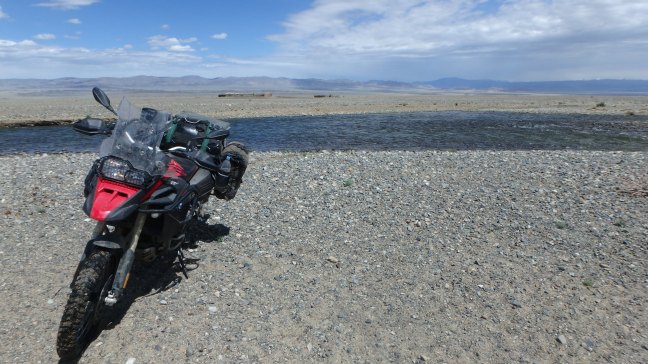 So after my blood pressure went down again I rode on through the next two smaller sections and found the track on the other side. 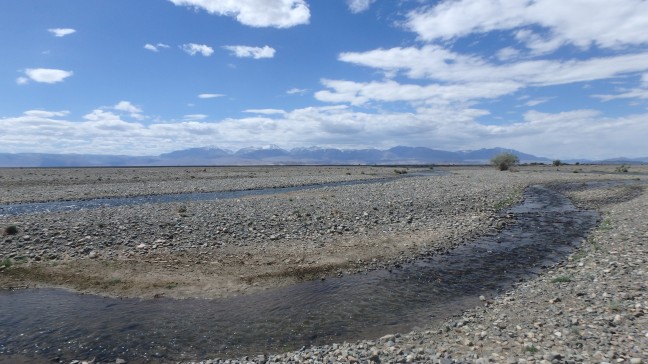 After around another 5 Kilometres of the Rock Graveyard I noticed the town of Bukhmurun appear on my GPS and it looked like it had fuel so I headed straight for it. 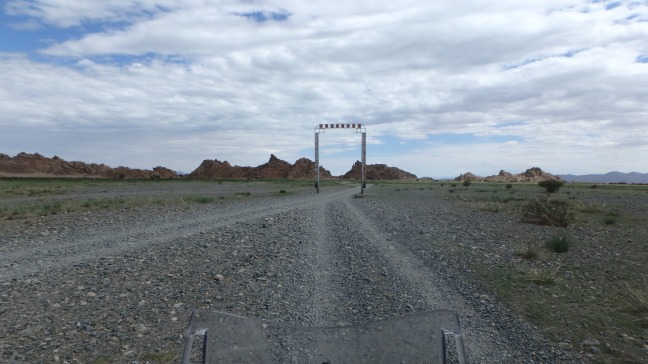 I found the Petrol Station and as I was fuelling up I met the local school teacher who spoke very good English (funny that).   He was surprised I got through the River unscathed but he also told me there were two more Rivers to cross on the west side of the town, one had a Bridge but one was very deep and I would not be able to cross it.   He said he had a friend with a 4X4 and Trailer that could take me across….for $70 US…my reply was that this was too expensive then it became $50 US immediately.   I said I would go and check the River first to see if I could cross and come back and see him if I couldn’t.   After riding out and looking at the river it seemed he knew what he was talking about so after some bartering he would get me across for around $35 AUD which was a lot less than what we started with.   So I follow him to his friends where they get the Trailer ready, the kids just love having their photo taken.   It is summer school holidays here which in Mongolia goes for 3 months, and before any of the Aussie kids get excited they don’t have any other holidays during the year. 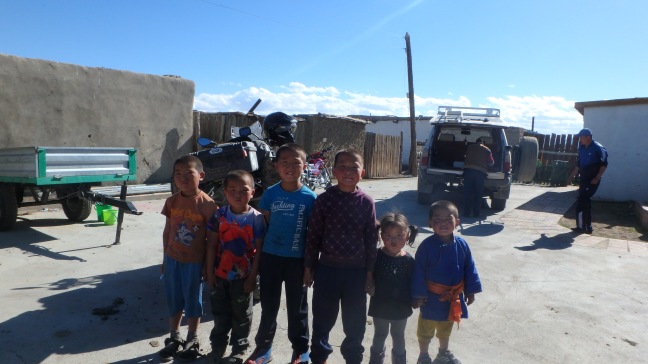 So I follow them out to the River where I could ride through some smaller sections before we loaded the bike into the trailer for the difficult section.

More Photo ops for the kids, they were having a ball.

So the Bike is loaded up and strapped down and off we go, I tried to get some video but I was preoccupied holding on so I didn’t end up in the River after all. 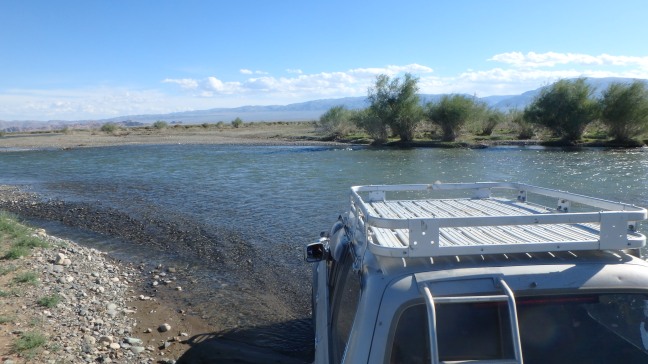 Safe and dry on the other side.   There was no way I could have ridden across that River as it was far to deep, wide and fast flowing so the $35 was one of the best investments I’ve ever made, not sure what the guys will do for extra cash when they build a Bridge.

My lift disappears back over the River and I repack the bike ready to head off again. 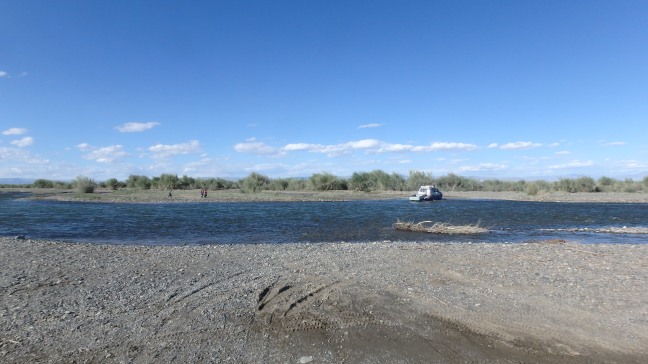 A couple of small water crossings and a lot more dirt and gravel.

Brought me to this Mountain Pass that lead me to the Town of Tsagaannuur.   This was also a stunning area but by now I had been riding for around 11 hours straight and I wasn’t interested in scenery I just wanted to get onto the Bitumen and in to Ulgii. 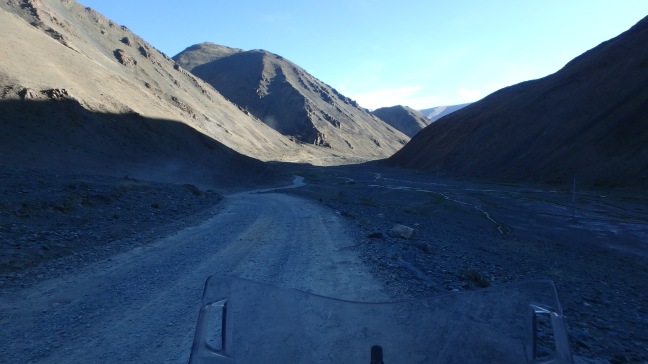 Which is exactly what happened.   Except for a short Gravel section over a Mountain Pass the road was all good quality Bitumen. 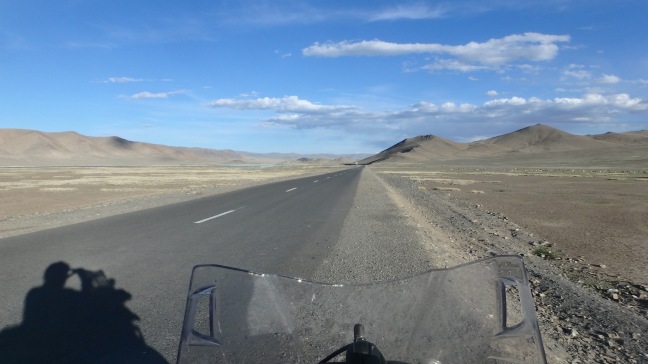 Where I made my home in a Ger at the Travellers Guesthouse for the next 3 days until my Russian Transit Visa started and I could continue on.

So in the end the 200 Kilometres from Uureg Nuur to Ulgii took me around 12 hours, Mongolia has a way of turning an easy day into a very hard one, but this is what its all about isn’t it?  Otherwise I might as well be sitting on the couch at home watching the Long Way Round……again.