So after recovering my bike and spending my last night at the Sum Guesthouse I pointed my bike north and headed out of Busan early.   This was easier said than done, I had GPS Mapping but it didn’t recognise town names further north and add to that the ‘no motorcycles on the Freeways rule’ made it very difficult to make any headway.   Now the Korean drivers are something else, either slow erratic and all over the road or excessively fast and pass you any way they can, to be polite the overall skill level is pretty average.   Once I finally got out of Busan and travelled towards the coast I found some quieter roads.

After some hours of riding alone through this Valley I found a National Park called The Ice Valley, again very few cars or people around. 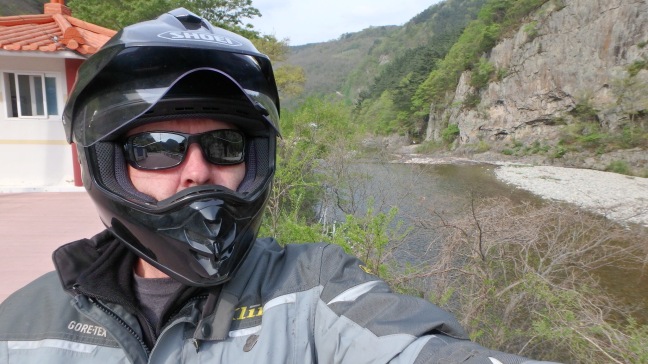 Later in the day I decided to camp and I found this old Soccer field in a small town and set up, there was a beach nearby so had time for a short walk. 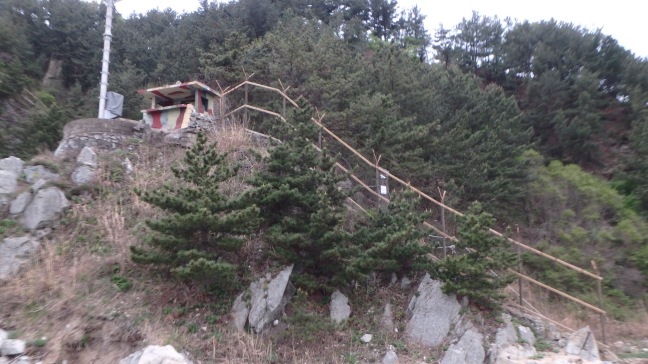 So it was a very quiet night sleep but when I woke in the morning it turned out the track around the Soccer pitch was part of the elderly excercise circuit, so smiles and waves to everyone who walked past.

What I didn’t know was that as a result of around 8 hours riding yesterday I had only about 130 kilometres to reach Donghae where the Ferry would leave tomorrow, an easy day.

So a short ride into Donghae and a few hours at the beach. 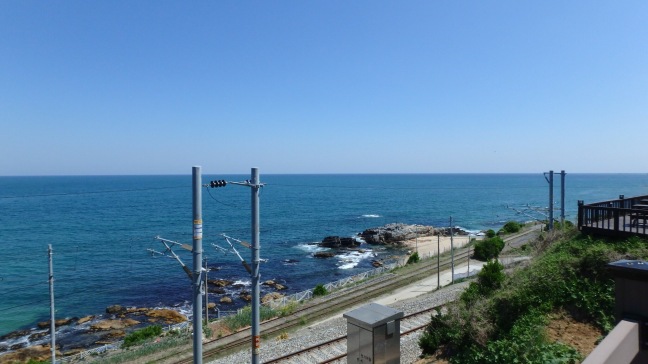 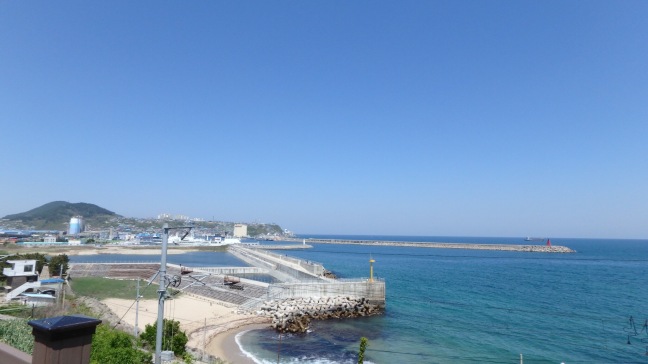 After a night at a local hotel it was off to the Ferry Terminal in glorious sunshine.   Here I met up with a Polish/Australian girl, Kinga who is riding a similar trip to me back to her homeland in Poland, we had been comuincating by email but finally got to meet, her blog is http://www.onherbike.com and is well worth a read.   I also met some of the Korean guys who had been riding with Kinga for the past week, they are the founders of the South Korean BMW Club and are a wealth of information on touring South Korea on Motorcycles.   I also met another South Korean guy, Robin who is also heading to Vladivostok with his Motorcycle then riding to Moscow and into Northern Europe so we will all cross paths throughout the journey. 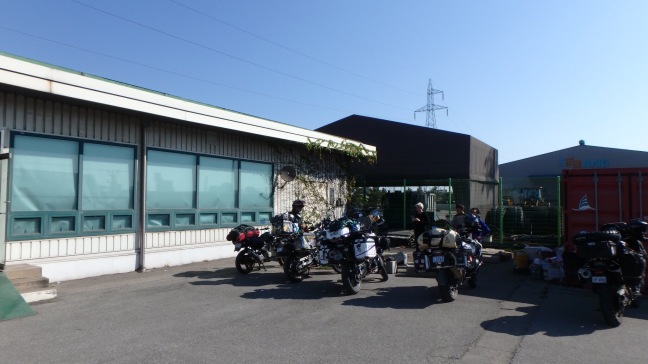 The three bikes were checked through Customs, we rode them onto the Ferry and were then directed out into the foyer where we paid for the Ferry tickets and waited to board. 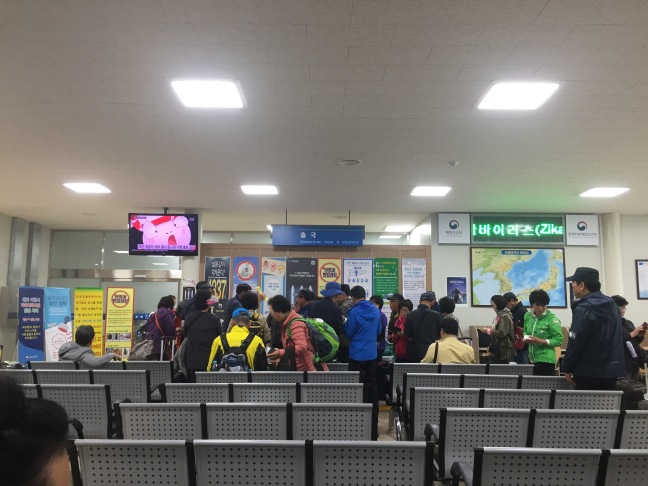 After a few hours were were on and shown to our rooms, Wendy (South Korean Agent) had booked both mine and Kinga’s rooms so we had no idea what they would be like, turned out we both had twin rooms to ourselves at the front of the ship and compared to the other areas they were luxurious. 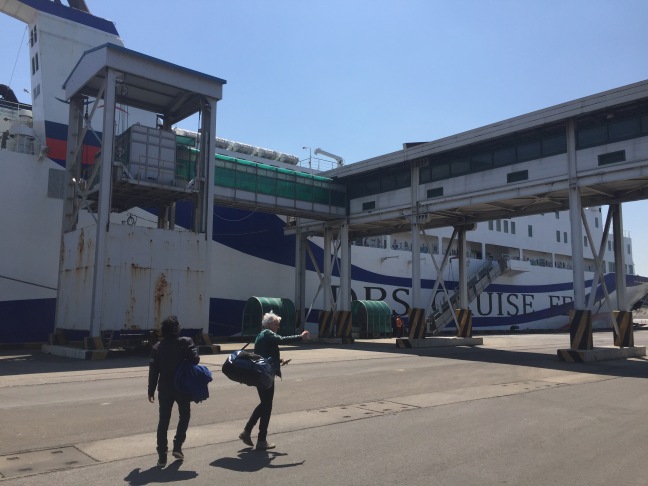 So shortly after in beautiful sunshine we set sail for Vladivostok, Russia. 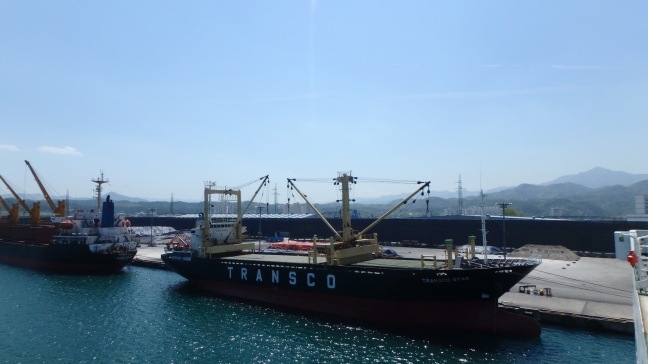 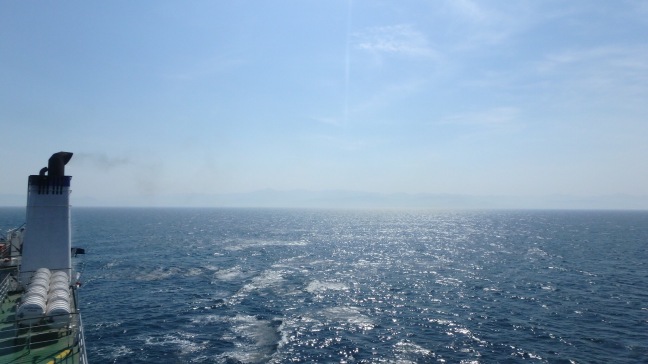 One problem I had is that once we left the bikes in the Ferry we couldn’t return to them until arriving in Russia, I had forgotten to bring spare shoes as I was wearing my Motorcycle boots and gear, I thought it was a bad look to roll into dinner with bare feet or Motorcycle Boots so I found these little numbers in the gift shop for around $1.50 and they match the colour of the ships deck so problem solved………

So thoughts on South Korea;

I really wasn’t there long enough to make any calls other than what I have mentioned, it is more westernised than Japan which brings both good and bad, the roads can be dangerous and confusing but the people are very friendly and genuinely want to show their country in a positive way.   Prices generally are slightly less than Japan or Australia and once out of the cities and towns the country is beautiful and quiet and the east coast is a fantastic area for motorcycle touring, I wish I had planned more time here but bring on Russia.

One thought on “South Korea and the race to the Ferry.”